Yoogane Malaysia has just opened its first branch in Malaysia. After opening their branches in Singapore, Jakarta, Bangkok and other countries, they are now in 1 Utama.

The Birthday Promotion & Set Lunch Promotion will be launched in the middle of March 2017, remember to check out Yoogane’s facebook page for the latest announcement:- https://www.facebook.com/yoogane.malaysia/

This South Korean Dak Galbi chain restaurant was established in 1981. They pride themselves as one of the most popular and best Chicken Galbi restaurants in Korea. If you can see in the picture below, they claimed to be the “No. 1 Dak Galbi from Korea”. 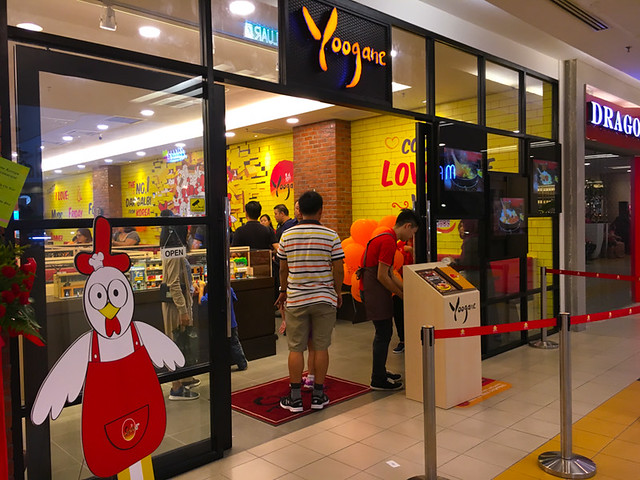 In case you do not know what dak galbi is, dak galbi is actually a stir-fried dish of chicken, seafood and etc. with gochujang (chilli pepper paste) based sauce and other ingredients. 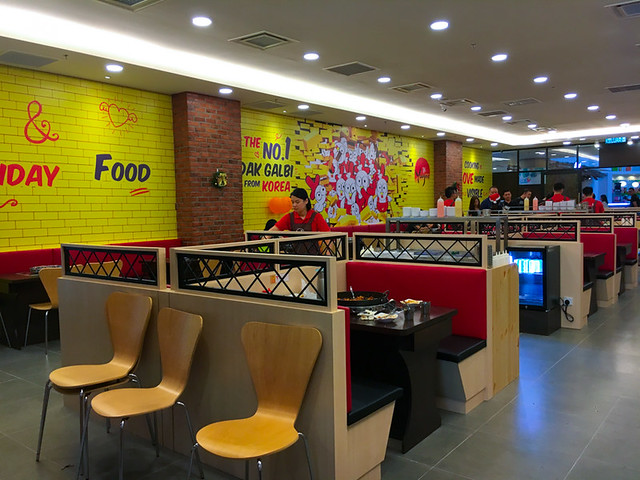 Yoogane is extremely well received in Busan, Korea and despite the fierce competition from other restaurants Yoogane’s dal galbi remains the favourite among their customers after all these years.

One of the popular dak galbi on their menu is the Cheese and Chicken Dak Galbi. This is the only dak galbi that comes with the cheese “ring”. It comes with Sweet Potato Dokboki, Dokboki (Rice cake), slices of sweet potato and chopped leek. 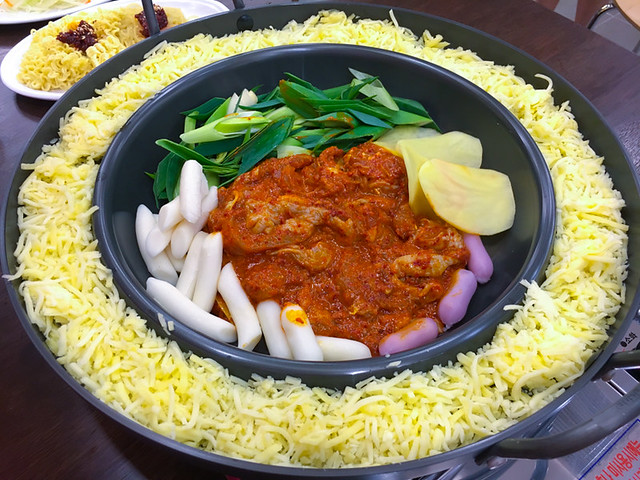 Here, you don’t have to worry about cooking anything. Everything will be cooked for you. So, all you need to do is to sit back, relax and watch all the cooking done right in front of you. The whole cooking process takes about 10 to 15 minutes. 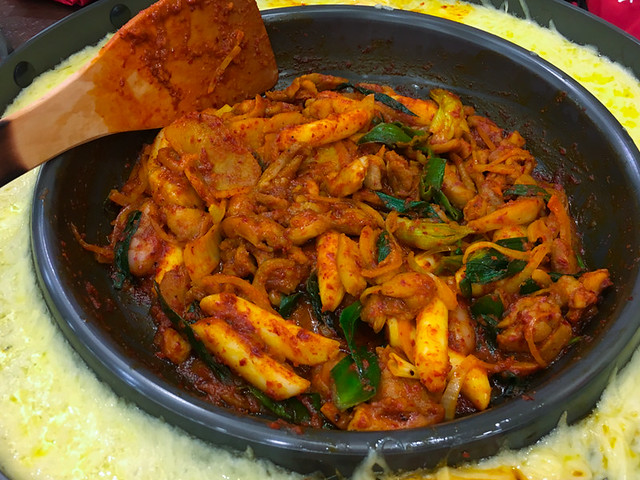 Yoogane’s seafood and chicken dak galbi @ RM89.90 is a better deal as they don’t give normal prawns or tiger prawns for that matter. They gave Ming prawns aka King prawns. The most expensive prawns in the market. Look at the size of these babies. They are even bigger than the mussels. 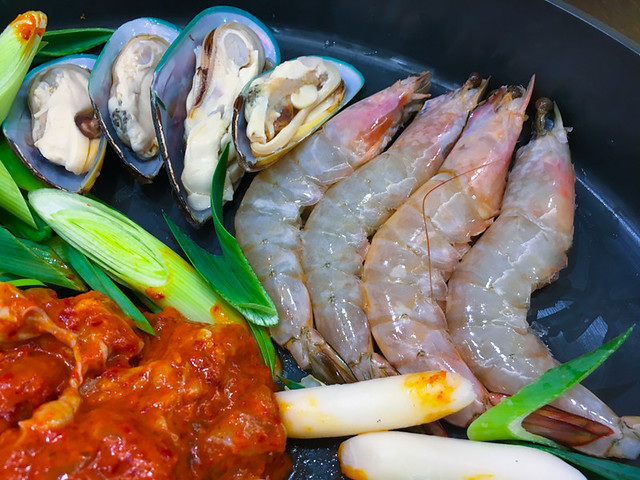 This seafood dak galbi comes with Ming prawns, mussels, marinated chicken, cabbage, leek, dokboki and sweet potato. Looking at their menu, it seems that the seafood ingredients may change depending on the availability of the seafood. This dak galbi does not come with any cheese “ring” and if you wish to have cheese with your dak galbi (which I highly recommends) and you can only top up for additional costs. 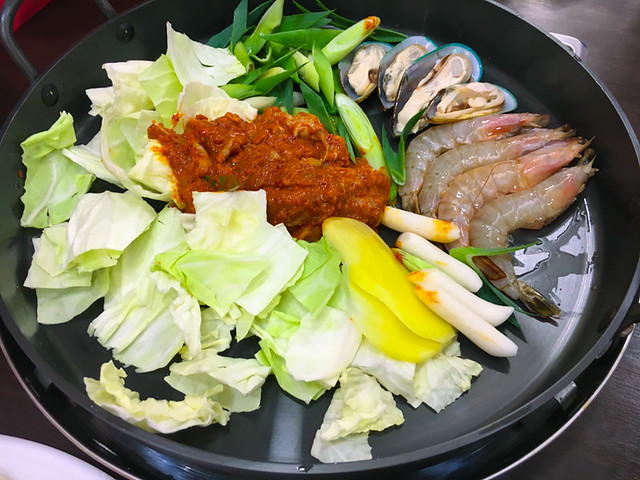 The portion to this dak galbi is enough to be shared among 2 to 3 people. You may also add additional toppings to complete your meal. 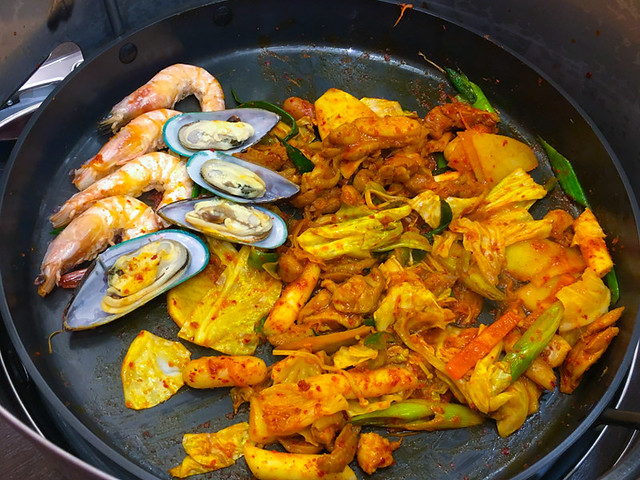 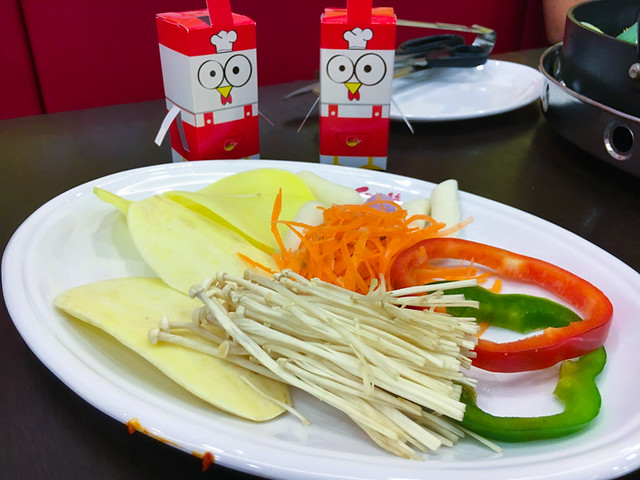 The 2 different types of noodles given are ramyeon and and sticky noodles. 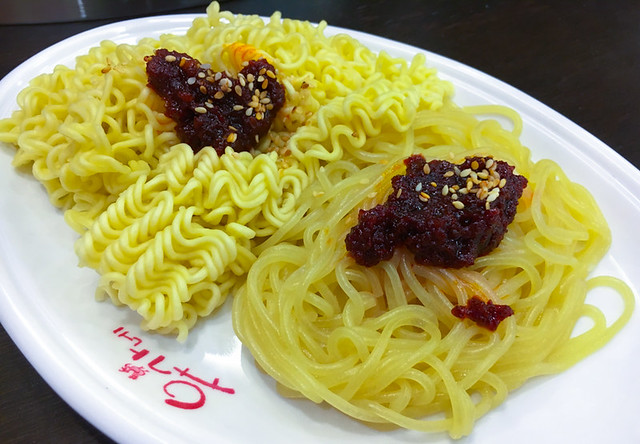 There are a variety of side dishes that are available as well and they include the Egg Roll and Korean Style Seafood Pancake. Both side dishes are extremely popular among the Korean crowd. 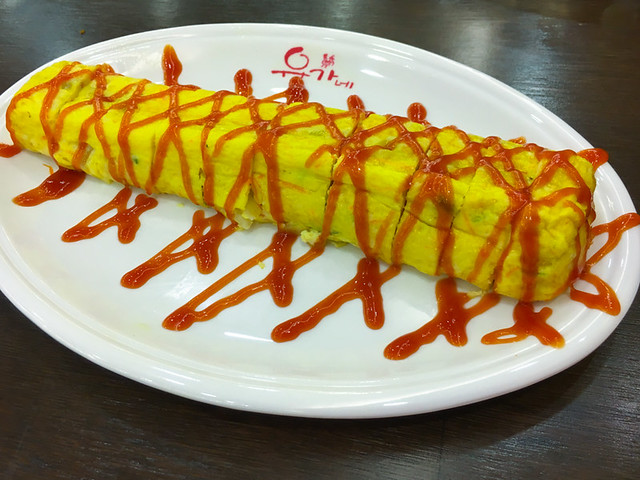 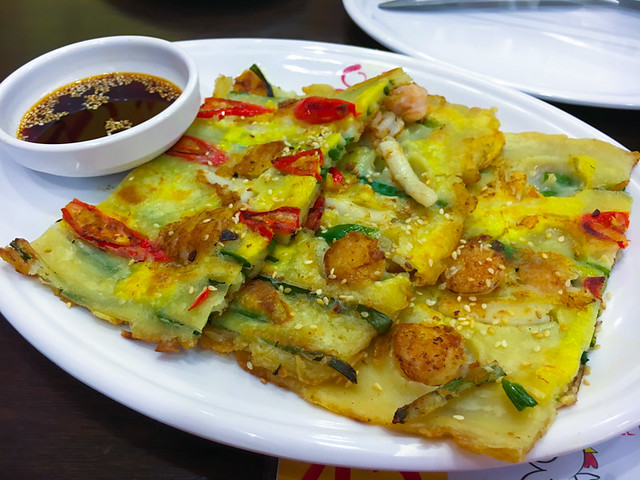 This is my second visit to Yoogane Dak Galbi at 1 Utama and this time, we got to try Yoogane’s Army Stew.

The name Army Stew may sound odd to some of you who didn’t know the history of how this name came about. But there is a reason behind this name. The army stew or military stew came about when food was scarce after the Korean war. Koreans made stew by combining leftover of spam and hot dogs left by the U.S. army. And hence the name army stew or military stew was born. 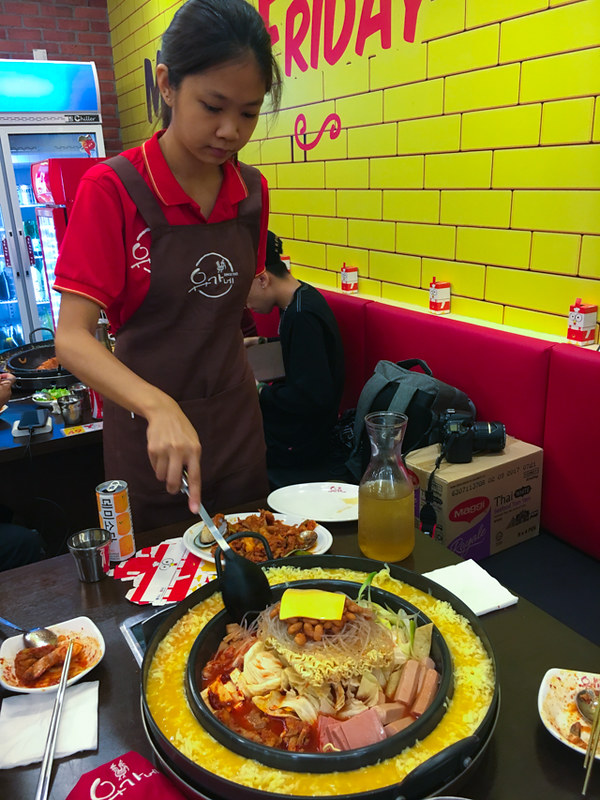 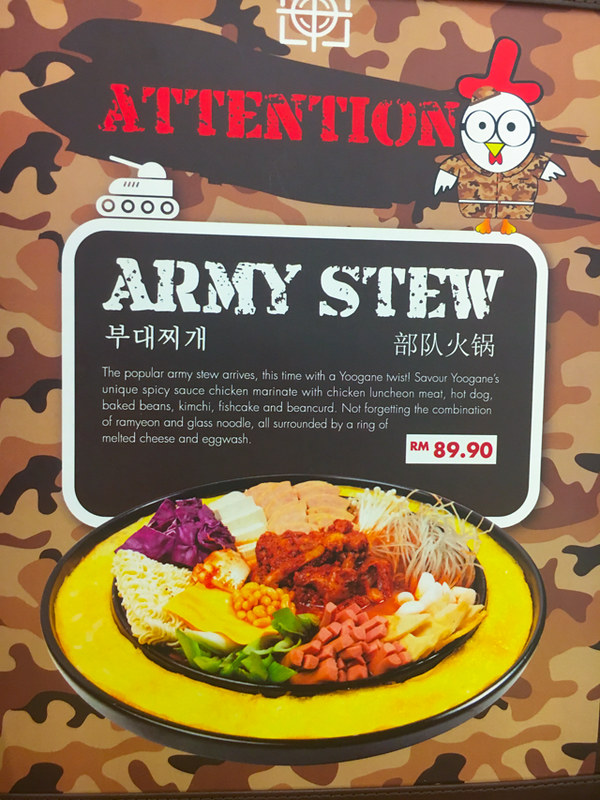 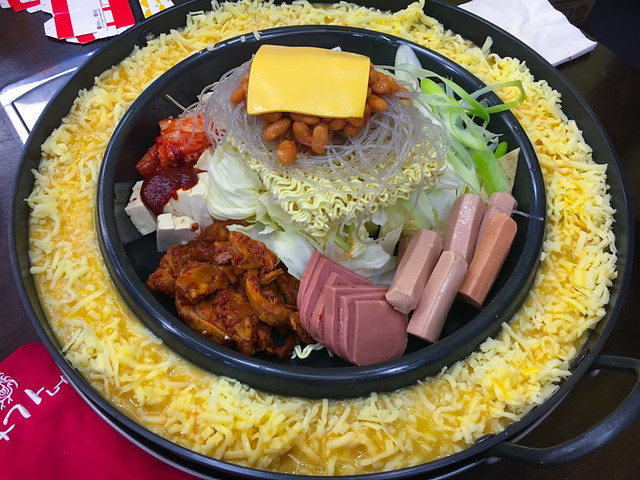 Like the above seafood and chicken dak galbi, you don’t have to do any cooking here. The cooking process for this army stew is about 10 to 15 minutes. After everything is ready, just dip your ingredients into the cheese and egg wash. 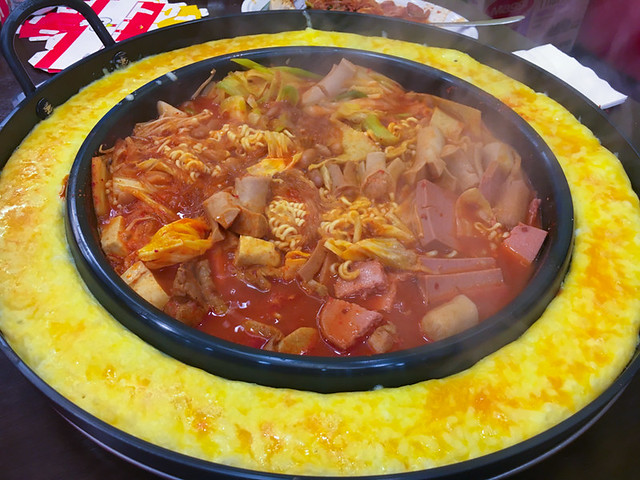 The seafood and chicken dak galbi was so so good that we couldn’t help our self but to order it again. In fact, the second time was even better. It was much tastier and it came with a lot of sauce. We suspect our current visit’s version was much better than our first visit is probably due to the ramyeon and glass noodles that we’d added. The noodles absorbs the sauces and it made our seafood and chicken dak galbi slightly dry. 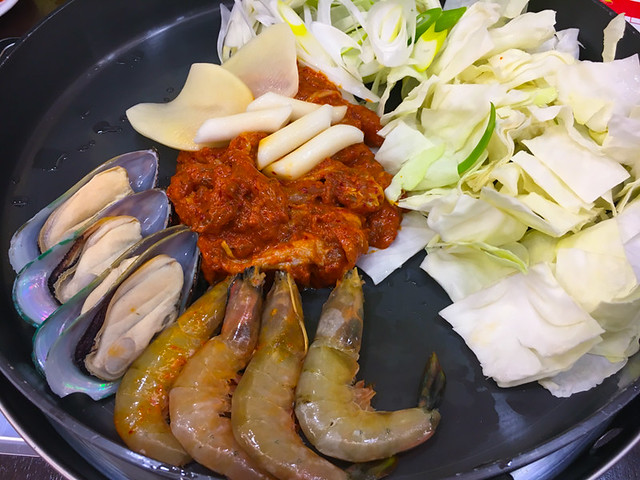 My advise for you is to order 1 set of seafood and chicken dak galbi and 1 set or army stew. This is the best combination (in my opinion) to try the best of Yoogane’s dak galbi and army stew. 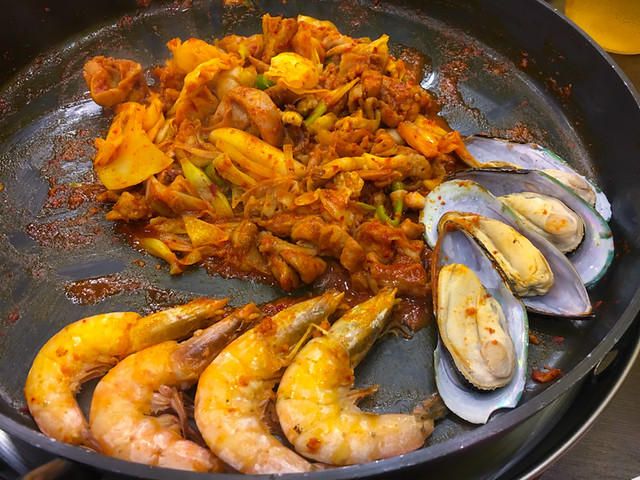 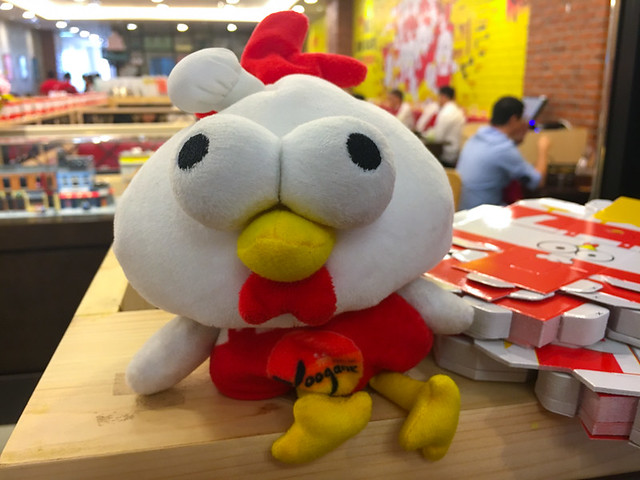 So head over to Yoogane at 1 Utama and try out their dak galbi. This is the menu from Yoogane Singapore which is similar to the one in Malaysia. 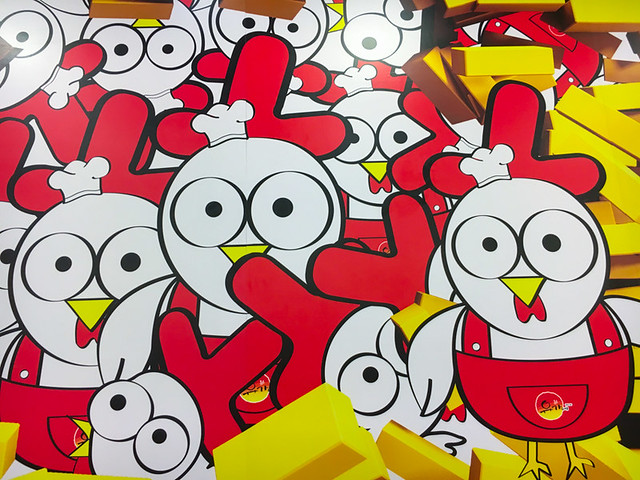