21 January 2017 marks the start of the Flavour of Hanami exhibition in Isetan The Japan Store, Bukit Bintang. The word ‘Hanami’ means, cherry blossom. Cherry Blossom viewing (Hanami) season has arrived to many areas in the southern part of Japan and Kyoto is one of the place you can go to witness this. It is estimated that the best time to go to Kyoto for Hanami viewing is late March to early April 2017. 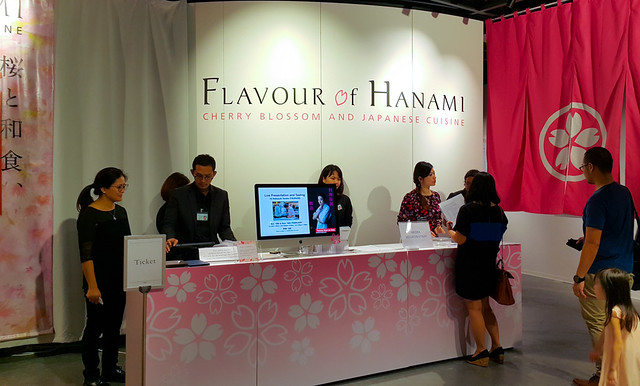 For those of you who don’t have the chance to go to Japan, you may go to Isetan The Japan Store to experience ‘The Flavour of Hanami’. The exhibition was graced with a live presentation and tasting by Chef Shogo Sasaki, a chef from the famed restaurant IZUU in Kyoto. Frankly speaking, at first, I do not understand what they meant by flavour of hanami. Cherry Blossom flavour? I wonder what that taste like. Then it occur to me. Its the flavour of Spring! It’s the food and drinks Japanese have during spring. 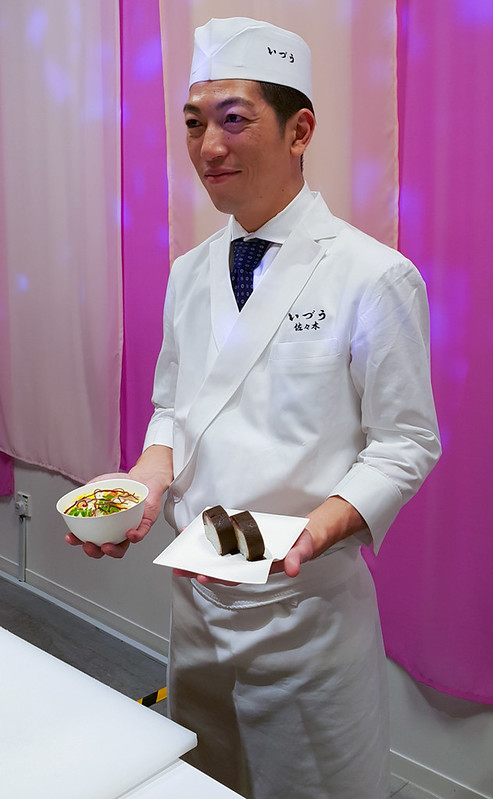 The Hanami themed exhibition is presented by Dai Nippon Printing Co., Ltd and there are 3 different zones – The Gallery, Theatre and Food. At the Gallery, you can see the original Hanami bento boxes, the real tradition and craft of Japanese cuisine. At the Theatre, you’ll be able to watch a high definition short movie which gives an enticing insight into the 4 Japanese seasons. Here, you’ll also get to watch the history and foundation of Kyoto food which is considered the best of all Japanese cuisine. 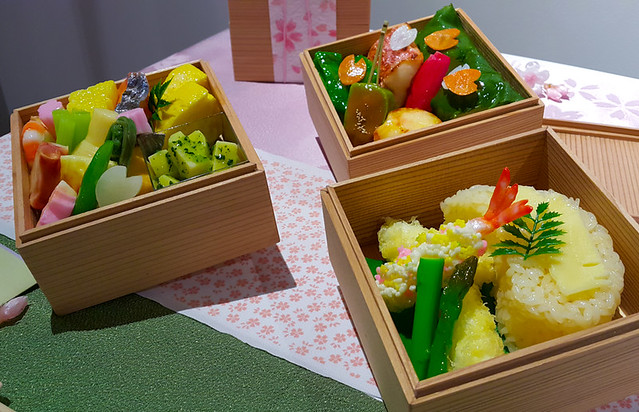 It is truly an eye-opening session to watch Chef Sasaki do what he does best (preparing the original Kyoto-style dishes) right in front of us. IZUU restaurant in Kyoto was established in 1781 and Chef Sasaki is the 7th generation owner of IZUU. That’s more than 200 years ago. 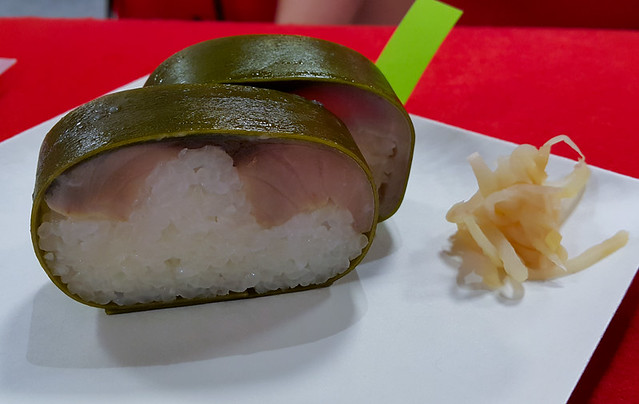 Chef Sasaki is known for his culinary prowess in preparing the popular mackerel sushi (rod-shaped sushi topped with mackerel), a dish which used to be for the rich only. A quick search on IZUU’s menu in Kyoto reveals that one roll of mackerel sushi is priced at 4500JPY ~ RM180.00. If one roll can be cut in 10 pieces, that’s RM19.00 for 1 piece. This luxury food is made by traditional methods using carefully selected ingredients including fatty mackerel from the ocean near Japan. The rice used is the Omi Rice which is grown in Shiga prefection. The Japanese kelp on the outer layer is from Hokkaido.

The mackerel sushi can be given as a gift to your family or business associates as gifts. Depending on the season, different packaging will be used to wrap this premium gift. 4 packagings for 4 seasons. 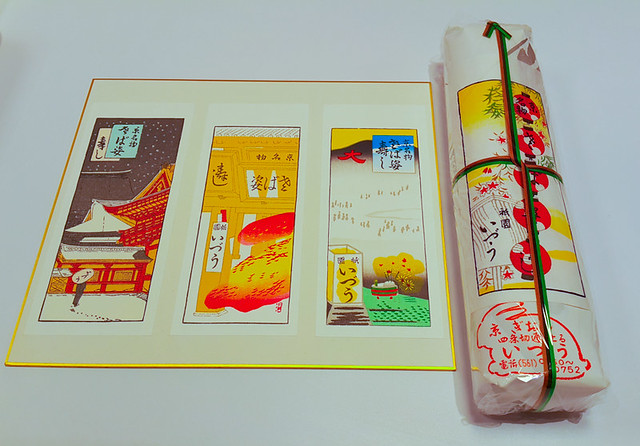 We also had the opportunity to try the Kyoto-style Chirashi-zushi (Scattered Topping Sushi) @ 3240JPY ~ RM120.00, which is another signature dish of Chef Sasaki. In case you are wondering what was ‘scattered’, there are kinshi egg, prawn, squid and sea bream. 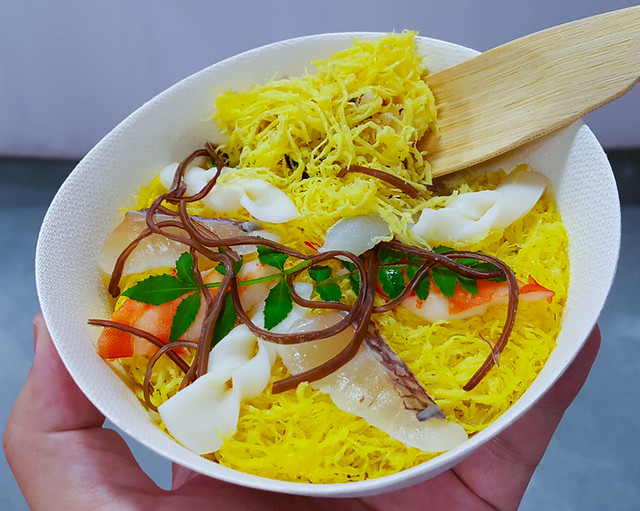 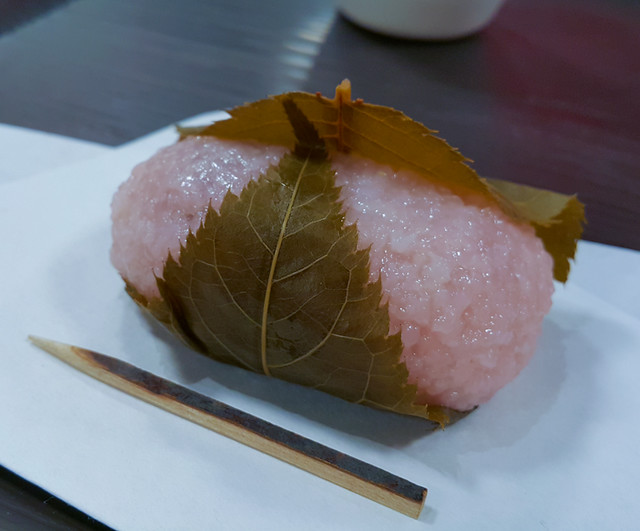 In case you missed Chef Sasaki’s live presentation, you could still catch other renowned Japanese chefs in action in February and March 2017. There are only 6 sessions each for each chefs and seats are limited to the first 25 people.

So book your tickets now at 3rd Floor @ THE CUBE / CUBE_1 Ticket Counter at Isetan The Japan Store, Bukit Bintang. Its only RM100.00 per person.

Alternatively, you may also purchase online at www.eventbrite.com or call 03-2382 7777.

Live Presentation and Tasting
Chef Nobuyuki Tanaka from Tsuruse : Sat 18 – Sun 19 February 2017
He is a 4th generation owner of a restaurant an inn that was established in 1932. Set against the backdrop of a luxurious inn complete with large hall and individual overnight guest rooms, he constantly strives to provide exceptional customer-based service and cuisine.

Chef Hideki Shimoguchi from Chikurin : Sat 4 – Sun 5 March 2017
He established this restaurant in the Uji area of Japan, which is famous for its tea. He is also actively engaged in activities to increase the appeal of innovative culinary techniques using matcha green tea and hoji-cha tea and in conveying Japanese cuisine outside of Japan.

Chef Takuji Takahashi from Kinobu : Sat 18 – Sun 19 March 2017
Qualified as a senior sommelier, he is an innovative chef engaging in the discovery of new Kyoto cuisine including wine pairings. The restaurant excels at bento boxes created using the techniques developed as a store specializing in catering.